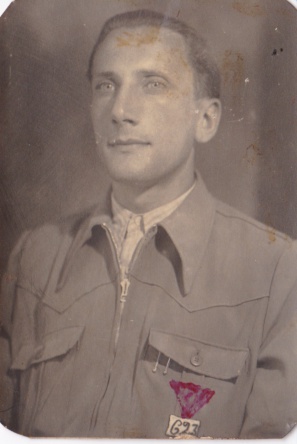 Wille Heimig was born in Eilendorf near Aachen in 1911. As a juvenile, he first joins the anti-republican Stahlhelm organisation, later the SA and finally he becomes a member of the Nazi party NSDAP and the SS. At the beginning of 1930, the unskilled worker Heimig participates in the flourishing smuggling activities at the Belgian border, is trapped and arrested by the GESTAPO. After spending several years in prison, he is initially sent to the KZ Buchenwald as a political prisoner and 1942 to the KZ Natzweiler, where he becomes a Kapo (a prisoner supervising other prisoners). In this function, Heimig supports in particular French NN1 prisoners with food and lighter work and secretly smuggles letters for them out of the camp. However, some co-prisoners also accuse Heimig of maltreatments. In 1944, Heimig becomes camp senior of the Thil satellite camp and later in Kochendorf. His co-prisoners describe him as harsh but fair. He refuses to send sick prisoners to work, secretly obtains medications and prohibits that Kapos beat prisoners. Over this, he even gets himself into several confrontations with the SS. At the end of November of 1944, Heimig is released from the KZ and sent to the Eastern front with the Dirlewanger2 special unit. In February 1945 he is severely wounded in combat. In legal battles after the war, Heimig defends both former KZ prisoners and SS guarding soldiers and even KZ commandants. In the Natzweiler process that takes place in Rastatt in 1947, he is acquitted by two instances. In 1954, the French military tribunal in Metz sentences him to death in absentia in a much-debated decision. In 1948, Heimig becomes a member of the VVN (Union of Persecutees of the Nazi Regime) and the KPD (Communist Party of Germany). He dies in Kochendorf in 1991.

Nacht und Nebel (NN) [night and fog]. Decree of December 7, 1941: prisoners, who represent a special danger for the Reich, are to disappear without a trace. In concentration camps, they are treated very harshly.

Special unit of the SS, later of the Waffen-SS, named after its founder, Oskar Dirlewanger. Initially infamous for their murderous deployments to the Eastern front, the much-reduced special unit begins recruiting pseudo volunteers from concentration camps for the final fight. German political prisoners, mostly communists, join the unit in order to survive – and to defect to the Red Army at the first opportunity.